Geological Impact of the 1938 Hurricane

Shinnecock Inlet, when opened in 1938 by the hurricane, immediately began trapping sand. The amount of sand trapped annually inside Shinnecock Bay was calculated to be approximately 60,000 cubic yards per year between the years 1955 and 1969 (McCormack, 1973). The U.S. Army Corps of Engineers confirm that Shinnecock Inlet is trapping between 55,000 and 120,000 cubic yards of sand annually and the shoreline to the west of the Inlet has been eroding as a result of the sand trapping (Spencer and Terchunian). The figure to the right (Taney, 1961) shows the historical shoreline change (advance vs. retreat) and the rate of shoreline change from the years 1838-1933 (before the hurricane) and from the years 1940-1956 (after the hurricane). Click the image for a larger view. Taney's study showed that the natural rate of beach erosion (due to the littoral transport) of the area west of the future Shinnecock Inlet location was 1.2 feet per year. After the inlet was created by the hurricane and stabilized by jetties in the 1950's, the rate of erosion to the west of the inlet increased to 8.2 feet per year. To the west of the Moriches Inlet, the Fire Island Sea Shore also shows increased rates of erosion most likely caused by the trapping of sand by the two inlet jetties and the Westhampton groin field.

Recent aerial photographs (source: Library Map Collection, SUNY at Stony Brook) illustrate the sand-trapping ability of the Shinnecock Inlet. One can clearly see the trapping of sand to the east of the jetties (wider beaches closer to jetty) and the trapping (delta) inside Shinnecock Bay due to the flood tide into the bay. Please click the two photographs below for a larger image.

A review of maps of the Shinnecock Inlet (source: Library Map Collection, SUNY at Stony Brook) over time also shows a buildup (trapping) of sand to the east of the inletand inside the bay. Much of this sand would naturally move westward to the Westhampton Beach area if the inlet had not formed and been stabilized by jetties.

Moriches Inlet to the east was created by a powerful storm in 1931. Between 1933 and 1938, Moriches Inlet widened and deepened as tidal currents deposited large sand delta on both the ocean and bay side of the inlet. The 1938 Hurricane further widened the Inlet to over 4,000 feet (Kassner & Black, 1982). When just this inlet was open, the water from both the Moriches and Shinnecock Bays flowed through the Moriches Inlet causing scouring and widening. When the Shinnecock Inlet was opened by the 1938 Hurricane, tidal pressure was halved and the slower tidal currents allowed shoaling within the inlet area (Czerniak, 1976).

The jetties at both inlets were constructed and the channels maintained by local interests until the 1980s or 1990s. Locals were keen to have these inlets in place, and the Federal government was not initially involved. At some point, the local interests had Congress pass laws authorizing the Corps to assume responsibility for maintenance of the inlets. Thereafter, the jetties were rehabilitated and the channels dredged as necessary by the federal government (Kraus, 2004). The inlets were stabilized for navigation and tidal flushing. Once these jetties were in place, the westward movement of sand due to the longshore current was extremely inhibited. The U.S. Army Corps of Engineers estimates that Moriches Inlet has annually trapped 178,000 cubic yards of sand since 1953 (Spencer and Terchunian).

The Westhampton groin fields (a series of stone structures much like jetties that project seawrd from the beach) were constructed in the mid-1960's and the early-1970's to stop the erosion of sand caused by the Shinnecock Inlet trapping to the east. Downdrift from these groins was an average loss of 55,000 cubic yards of sand per year (Long Island Regional Planning Board, 1989). The known total volume trapped by 1991 was 2.4 million cubic yards (Nersesian et al., 1992).

The 1938 Hurricane has had a "domino-effect" on coastal erosion. By opening the Shinnecock Inlet several situations developed - all of which have caused rapid erosion of beaches to the west of Moriches Inlet: 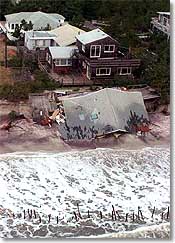 Newsday, 1992/David L. PokressIn Saltaire and much of Fire Island, a devastating nor'easter on Dec. 12, 1992, washed away much of the beach, leaving the shoreline severely eroded and houses toppled into the sea.