A hypothesis is an informal idea that has not been thoroughly tested by the scientific community. Most are discarded. A hypothesis becomes a theory when it can explain and predict observations and it also has been thoroughly tested by the scientific community. Even theories, over time, can be disproved and discarded. If a theory stands the test of time (years and decades) it may be called a law or unifying theory and is the closest approximation to "the truth" possible. One must keep in mind that it is impossible to prove that a theory is true, only that is is untrue. Because one cannot study world climate in a laboratory setting, the best method to test climate change hypotheses is to use climate models. Climate models are extremely sophisticated computer programs that simulate climate.

There is considerable confidence that climate models provide credible quantitative estimates of future climate change, particularly at continental scales and above. This confidence comes from the foundation of the models in accepted physical principles and from their ability to reproduce observed features of current climate and past climate changes. Confidence in model estimates is higher for some climate variables (e.g., temperature) than for others (e.g., precipitation). Over several decades of development, models have consistently provided a robust and unambiguous picture of significant climate warming in response to increasing greenhouse gases. (IPCC, 2007)

In a January 2010 analysis, Tamino at Open Mind shows that there is very good agreement between model projections and actual observations. Take a few minutes to view his analysis.

Climate models do have their limitations and modelers are constantly improving their models with newer data as the understanding of climate processes improves with research. According to the IPCC (ibid): "Nevertheless, models still show significant errors. Although these are generally greater at smaller scales, important large-scale problems also remain. For example, deficiencies remain in the simulation of tropical precipitation, the El Nino-Southern Oscillation and the Madden-Julian Oscillation (an observed variation in tropical winds and rainfall with a time scale of 30 to 90 days). The ultimate source of most such errors is that many important small-scale processes cannot be represented explicitly in models, and so must be included in approximate form as they interact with larger-scale features. This is partly due to limitations in computing power, but also results from limitations in scientific understanding or in the availability of detailed observations of some physical processes. Significant uncertainties, in particular, are associated with the representation of clouds, and in the resulting cloud responses to climate change. (A good paper on this subject is Trends in Observed Cloudiness and Earth's Radiation Budget: What Do We Not Know and What Do We Need to Know? by Norris and Slingo (2009).) Consequently, models continue to display a substantial range of global temperature change in response to specified greenhouse gas forcing. Despite such uncertainties, however, models are unanimous in their prediction of substantial climate warming under greenhouse gas increases, and this warming is of a magnitude consistent with independent estimates derived from other sources, such as from observed climate changes and past climate reconstructions." 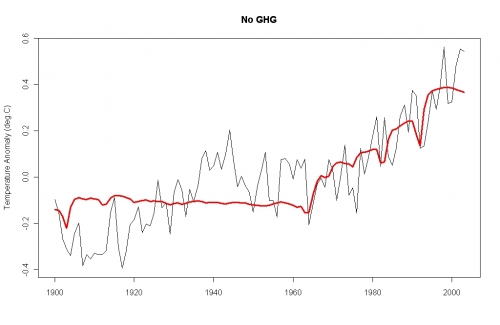 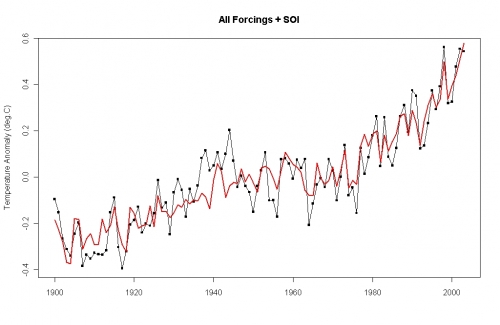 Three more sites with an excellent discussion include: SkepticalScience: How reliable are climate models?, and Realclimate: On Attribution & Updates to model-data comparisons.

Another example: mathematicians cannot say with much certainty which side will land on a single coin flip. That is like predicting weather. However, a mathematician can say with great certainty how many heads and tails will be flipped after one million flips. That is like climate prediction. It is not 100% but it much closer to 100% than 50%. Of course, this is a gross oversimplification because weather and climate are more complicated than a choice between heads or tails on each iteration. However, the valid point being made is that long term trends are easier to predict than individual events.

A slightly more technical explanation is offered by the Atmospheric Science Assessment and Integration Section Science and Technology Branch Environment Canada (2008) below:

Climate is average weather, which is more predictable than day-to-day and hour-to-hour weather changes. Weather behaviour is chaotic and often difficult to predict beyond a week or so into the future. By comparison, climate is largely determined by global and regional geophysical processes that change slowly. Hence, if these factors are properly understood and predictable, then the climate can be forecast far into the future with a significant degree of confidence.

Day-to-day local weather is largely determined by atmospheric circulation, the formation of large-scale weather systems, and local convective processes. Because of the chaotic nature of the atmosphere, predictability decreases with time, and is quite poor beyond a week or so. Climate, on the other hand, represents average weather and its expected variability. These are determined by factors such as incoming solar radiation (which varies with latitude and time of year), the influence of prevailing characteristics of cloud cover, aerosols and other components of the atmosphere on the flow of the Sun�s energy into the atmosphere and of heat energy out again, prevailing winds and other atmospheric conditions, and local geophysical conditions that, in general, change slowly and in a more predictable manner. Thus, while forecasters would be unable to predict day-to-day weather 6 months into the future, they can provide good approximations of the changes in seasonal climates because of known physical processes that cause conditions to change from winter to summer and back again. They can also provide estimates of the changes in probability of different kinds of weather events, such as sub-zero minimum temperatures, maximum temperatures in excess of 30�C, snow blizzards or thunderstorms. Likewise, climate models, when looking much farther into the future, project how the climate characteristics, averaged over several decades, might change in response to projected changes in the factors that determine the climate.

A person who claims "how can we predict climate change over decades when we can't even predict tomorrow's weather?" has a fundamental misunderstanding of modeling. 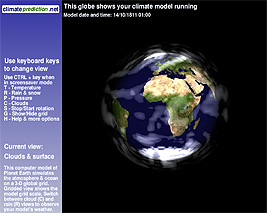 Climateprediction.net is a distributed computing project to produce predictions of the Earth's climate up to 2080 and to test the accuracy of climate models. To do this, they need people around the world to give them time on their computers - time when they have their computers switched on, but are not using them to their full capacity.

The model will run automatically as your screensaver. As the model runs, you can watch the weather patterns of the world evolve. The results are sent back to them via the internet, and you will be able to see a summary of your results on their web site. Climateprediction.net uses the same underlying software, BOINC, as many other distributed computing projects and, if you like, you can participate in more than one project at a time.

Participating in the project is very easy. All you need to do is download and install BOINC, then attach to the Climateprediction.net project � you can select the project from a list of all available projects when you run the client.

Download BOINC from the BOINC home page. A sample of the screen you will see when running this screensaver appears to the right and you can click for a larger image.