The climate of a region is typically defined by its monthly mean temperatures and annual (total) precipitation however, as Fig. 1.1 shows, direct observations of these variables did not begin until the 1600s.

The barometer and thermometer were invented by Torricelli and Galileo, respectively, in the first half of the seventeenth century. Early rain gauges being used to record precipitation were sometimes exposed on roofs, which led to inaccurate readings due to splashing out and to loss of water via evaporation. (These problems led Englishman Richard Townley in 1676 to lead a pipe down through his house so he could accurately measure the rain from his own bedroom!) Therefore, in order to determine earlier climate, investigators infer the climate record from physical and biological fossil data called proxy data. Oxygen and carbon isotope ratios are strong indicators of past climate and can be measured in ice cores, corals, trees, and marine fossils. Dendroclimatology (tree ring data) and pollen data also show the climate record with a good degree of certainty. The network of data is extensive as illustrated below in Figures 1.2 and 1.3. 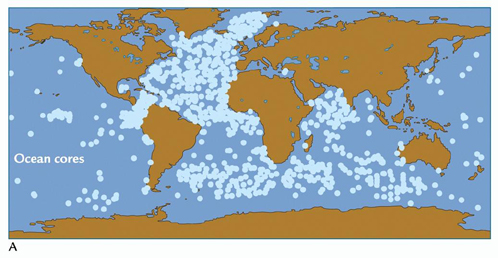 Sea life such as plankton incorporate carbon and oxygen from the surrounding sea water to form their shells. When they die they fall to the sea floor and end up trapped in ocean floor sediment. Cores of this sediment reveal these shells and the type of carbon and oxygen found in the ocean at that time.

Ice cores reveal the gases that were present in the ancient atmosphere. When snow falls it traps air between the flakes. This air contains a sample of the gases at that time including the greenhouse gases carbon dioxide (CO2) and methane (CH4). When the snow gets compressed into ice, these air bubbles are trapped. This process is known as sintering and reveals the climate on an annual basis for thousands of years into the past. Furthermore, the type of oxygen that is trapped in the ice (discussed in the next section) can illustrate the temperature of the ancient atmosphere to a reasonable certainty.

The atomic mass of an element is the sum of the protons and neutrons in the atom's nucleus. Isotopes of an element are still the same chemical element but with differing masses. The most common form of oxygen has eight protons and eight neutrons in its nucleus so it has an atomic mass of 16. This isotope is labeled 16O. Oxygen can also have 10 neutrons in its nucleus which gives that isotope an atomic mass of 18 and is labeled 18O. The ratio of 18O vs. 16O is typically denoted as δ18O. Presently, 16O makes up 99.8% of the oxygen on earth.

When water evaporates from the oceans, the lighter 16O leaves more easily so 18O is left behind. Therefore, evaporation increases the ratio of 18O vs. 16O in the ocean. If this evaporated water returns to the oceans, the 16O will return and the δ18O value will be unchanged. However, as most air is transported poleward, 16O may precipitate out and be locked in snow and ice. In this case, the ratio of 18O vs. 16O in the oceans will increase resulting in a + δ18O.

Figure 1.4 (Ruddiman, 2001) shows δ18O values for the previous 70 million years. Over the past 55 million years, δ18O has been increasing in the deep oceans which means more 16O has been locked away in ice indicating a tectonic cooling trend over that period. This cooling trend is primarily due to uplift chemical weathering (which removes carbon dioxide) by the creation of the Himalayas as the result of India colliding with Asia. One must keep in mind that this cooling trend has occurred over millions of years and at a very slow rate. 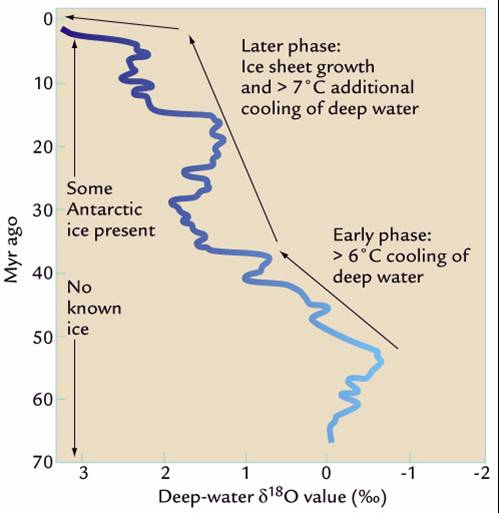 In shallower waters, corals incorporate oxygen into their shells so they are also a thermometer of the water at that time. Warmer waters are δ18O enriched because of the greater rates of evaporation in warmer conditions. Figure 1.5 (Ruddiman, 2001) shows the sea surface temperature (SST) trend based on δ18O values in fossil corals from the Pacific and Indian Oceans. In the past 60 years, there has been a warming trend in sea surface temperatures.

Studying tree rings can also lead scientists to conclusions about past climates. Unusually narrow rings means cooler temperatures and/or drier conditions. The figures below show the regional temperature anomalies calculated by using tree ring data in both the northern and southern hemispheres. In the past several decades, tree ring data shows an increased temperature trend in these regions. 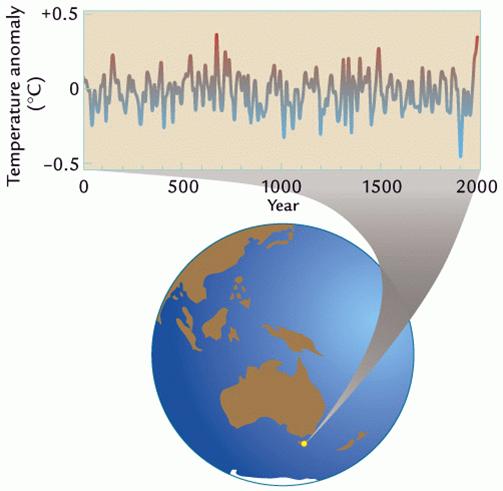 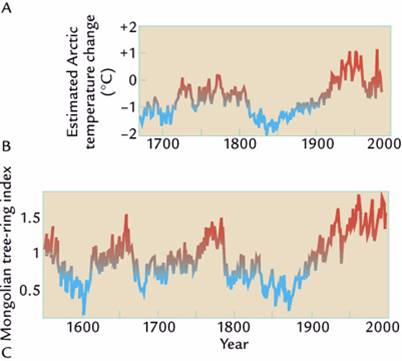 Figure 1.7: Temperature anomalies in the Arctic and Mongolia (Ruddiman, 2001)

The very rare radioactive isotope of carbon, 14C, is also measured in trees and provides a strong clue about the type of carbon in our atmosphere and the possible sources. This data will be discussed in Climate Change: The Smoking Gun for Humans.

Boreholes (deep holes drilled into the ground) have also been used to reconstruct past climate. Heat from the center of the Earth radiates up toward the surface in a fairly straight-line fashion. Temperatures of the rock near the surface are influenced by this radiated heat as well as heat from the atmosphere above. Atmospheric heat can penetrate quite a few meters into the underlying ground, especially if the climate above is warmer (contains more heat).

An example borehole temperature profile from Ottawa, Canada is shown below in Figure 1.9. 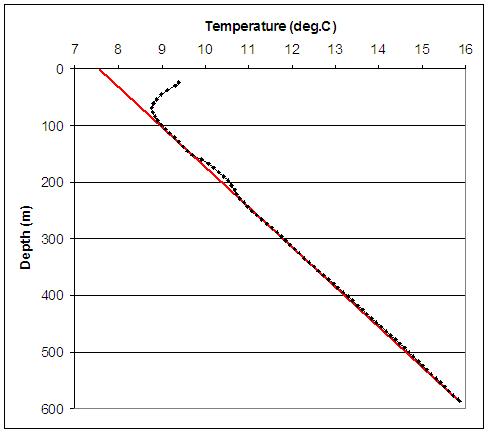 The red line is the temperature profile assuming no climate change while the black line shows the observed profile. One can see that there has been a warming of the climate because the near-surface rock has been warmed and this warming cannot have come from below.

According to Pollock (2005) the database of borehole temperatures has yielded (as of 2004) reconstructions at more than 800 sites on six continents. Taken as a global ensemble, the borehole data indicate a temperature increase over the past five centuries of about 1 Celsius degree, half of which occurred in the 20th century alone. This estimate of 20th century warming is similar to the record of surface warming determined by meteorological stations. The estimate of colder temperatures five centuries ago is consistent with the putative Little Ice Age determined from a host of other observations. Figure 1.10 (ibid) illustrates the borehole temperature reconstruction along with the borehole data sites.

Figure 1.11 (Huang, Pollack, and Shen, 2008) shows the following: a broad cool minimum around AD 200 that was followed by a warming that peaked AD 1200-1400; the Medieval Warm Period (MWP)), a subsequent cooling to a minimum around (AD 1700-1800; the Little Ice Age (LIA), followed by rapid and substantial warming in the past few centuries. The reconstructed peak temperatures in the MWP appear comparable to the AD 1961-1990 mean reference level, with the bold mid-range curve slightly below. None of the borehole reconstructions show MWP peak temperatures as high as late 20th century temperatures, consistent with the conclusions of both National Research Council (2006) and Intergovernmental Panel on Climate Change (2007) about the warmth of the MWP. The LIA temperature minimum shows an amplitude about 1.2 K below the MWP maximum, and about 1.7 K below present-day temperatures.

Figure 1.11: Borehole temperature reconstruction for the past 2000 years

There are several advantages from using boreholes to reconstruct past climate: (Huang, 2009)

So why use proxy data if boreholes are so accurate at measuring temperature? According to Open Mind (2007), "Borehole data enable us to reconstruct temperature on timescales of decades (nearest the surface) to centuries (a couple of hundred meters below surface) to thousands of years (hundreds of meters to kilometers below the surface). So, while they're reliable and need no calibration, the time resolution of borehole reconstructions is very poor."

Many reconstructions can be found at NOAA Paleoclimatology Program. To learn more about these proxy data please visit Surface Temperature Reconstructions for the Last 2,000 Years by the National Academy of Sciences.

Figure 1.13 (ibid) shows the temperature reconstruction as a result of careful analysis of these multiple proxy data. It becomes quite clear that the modern climate is much warmer than at any time in the past 1800 years.

Figure 1.13: Plot of the reconstructions over a) 1800 and b) 1000 years along with selected older ones for comparison.

As I showed in my October 2010 blog post, Shooting the Messenger with Blanks, this hockey stick-shaped temperature reconstruction which shows modern climate considerably warmer than past climate has been verified by many scientists using different methodologies (PCA, CPS, EIV, isotopic analysis, and direct T measurements).

Next: Impact of Greenhouse Gases