"The trouble with the world is not that people know too little, it's that they know so many things that just aren't so."
-- Mark Twain

Skeptics of the current global warming now refer to the period between 1998 and 2008 and claim that global warming has ended. Some go one step further and claim that global cooling has begun. Of course, the observed data shows that this is nonsense. Figures 5.2 and 5.3 (Sato, 2010) show global temperature changes measured by surface stations and also by satellite. The increasing trend in temperature certainly debunks claims that the world is experiencing global cooling.

The last 10 years are the warmest 10-year period of the modern record. Even if you analyze the trend during that 10 years, the trend is actually positive, which means warming.

Further signs of this warming trend can be seen in the Northern Hemisphere Sea Ice Extent from the National Snow and Ice Data Center. As the graph in the hyperlink shows, sea ice extent has been dramatically reduced since 1979.

So why do some climate contrarians claim that there is global cooling in the face of this data? It boils down to "cherry-picking" data to intentionally misinform the public. Figure 5.4 (Hausfather, 2008) shows global surface and lower troposphere monthly mean anomalies relative to the 1979-1998 mean temperature. The data is from GISS, HadCRU, RSS, and UAH ranging from January 1979 to February 2008. GISS, HadCRU, RSS, and UAH represent the four organizations that publish online the global average temperature estimates. Many experts believe that GISS data is the preferred set because it is the only set that uses all regions of the globe. HadCRU, RSS, and UAH do not include polar regions. 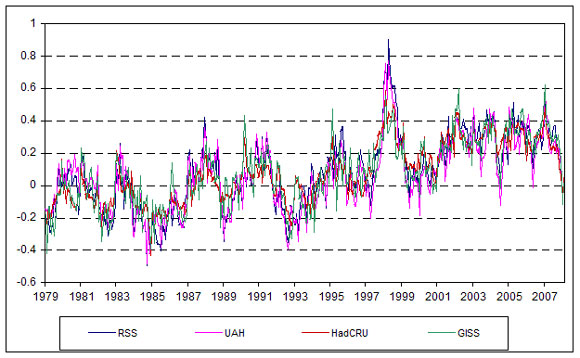 When one considers monthly mean temperature anomalies from 1998 to 2008 it might �appear� that there is a flat line or global cooling. Keep in mind two important points:

Figure 5.5 (Clark, 2009) focuses on the years 1998 to 2008 which is the time period used by those that wish to deceive the general public into thinking that global cooling is occurring. 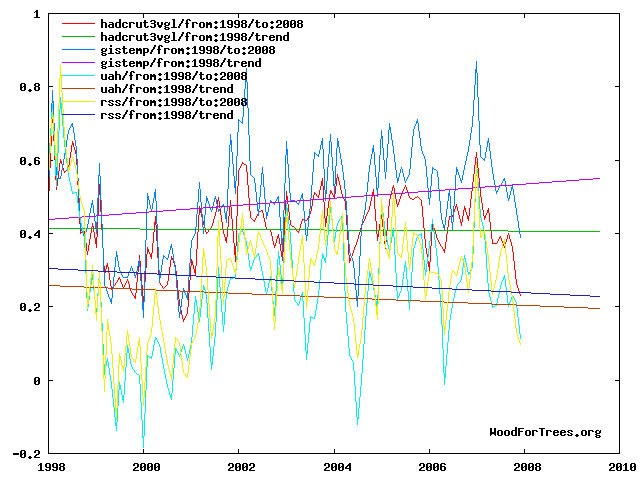 Three of the four global average temperatures indeed are decreasing in their trends (although the actual global mean temperatures are still warmer than the previous decades). 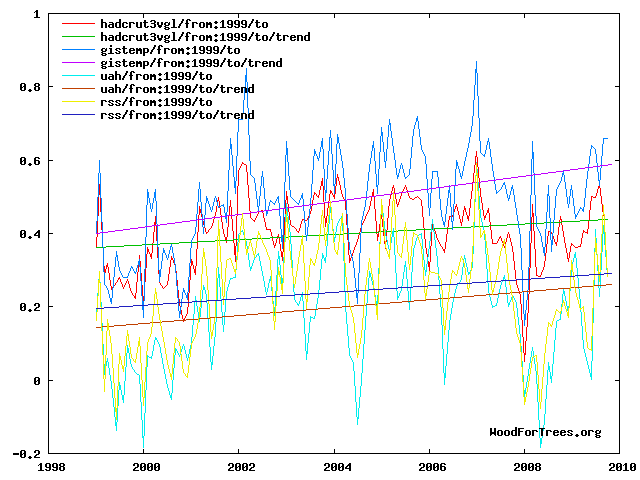 Simply by shifting our starting point by one year, all four global average temperatures are increasing in their trends! The point made here is that if one cherry-picks a small subset of the data, one can make just about any claim with a nice plot to back it up. The correct way to view global temperature trends is to look at ALL of the data. Figure 5.7 (Clark, 2009) shows the global average temperatures along with trends from 1880 to present. (Note: UAH and RSS data does not exist before 1980) 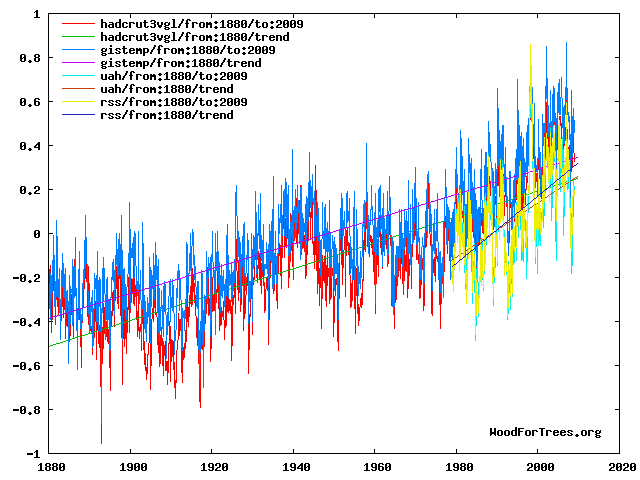 It is quite obvious that global temperatures have been increasing since 1880 and at a faster rate in the past two decades.

Tamino (2009) has a very good blog post about global temperature trends since the 1970s called Riddle me this.... Many skeptics claim that the warming predicted by scientists did not happen in the 2000s. The data shows otherwise! 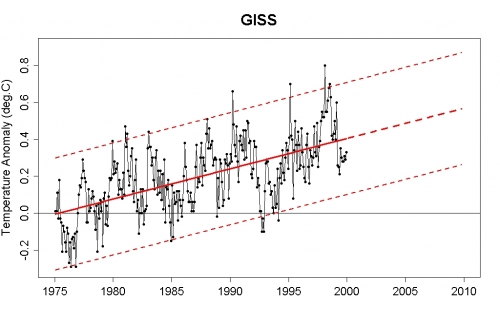 The solid red line is the trend using linear regression and it is extended as a dashed line to indicate this same trend into the future to the year 2009. The top and bottom dashed lines represent the bounds of two standard deviations where most data points are likely to fall. Figure 5.9 below shows what actually happened in the 2000s. So where is the cooling? 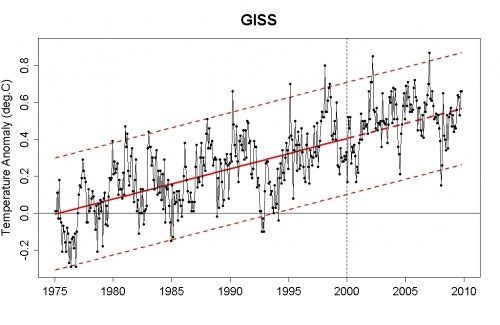 Prefer to use satellite-derived lower troposphere global temperatures so that actual thermometers are not being used (avoids any claimed UHI effect)? RSS and UAH are the two choices and UAH is run by two of the leading skeptics: Christy and Spencer. What did the UAH pre-2000 trend do in the 2000s? See figure 5.10 below. Yes, it continued to warm up! 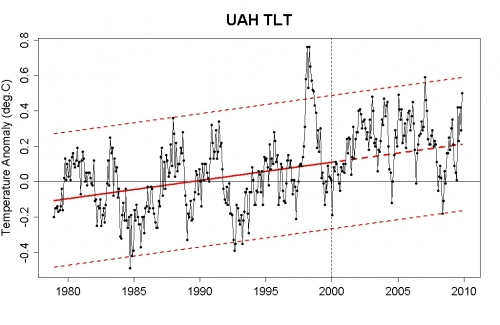 Zeke Hausfather from the Yale Forum on Climate Change & the Media has a similar analysis using HadCRU data. See: Claims of a Decade of Cooling Refuted By Analysis Showing It Warmest by Fair Margin.

Much of the heat that is delivered by the sun is stored in the Earth's oceans while only a fraction of this heat is stored in the atmosphere. Therefore, a change in the heat stored in the ocean is a better indicator of climate change than changes in atmospheric heat. Figures 7.2 and 7.3 (Richardson et al., 2009) displayed on my Modern Day Climate Change page clearly show that the oceans have warmed significantly in recent years and the trend is 50% greater than that reported by the IPCC in 2007. There is certainly no global cooling in the oceans!

To summarize the multiple lines of evidence that show there certainly is no global cooling:

Here is a more technical analysis of why global temperatures have not "cooled since 1998" nor "cooled since 2001" as some global warming critics claim: Embarrassing Questions from the Open Mind Blog.

Tamino (2009) also shows that at least 15 years of data is required for any statisitically significant trend to be determined. Using any period shorter than 15 years will result in the "noise" dominating the "signal".

Temperature trends - pick a timescale, any timescale! by Paul Clark, a British software developer, also shows the dangers of choosing time scales that are too short to determine a real trend.