The climate of a region is typically defined by its monthly mean temperatures and annual (total) precipitation however, as Fig. 1 shows, direct observations of these variables did not begin until the 1600's.

The barometer and thermometer were invented by Torricelli and Galileo, respectively, in the first half of the seventeenth century. Early rain gauges being used to record precipitation were sometimes exposed on roofs, which led to inaccurate readings due to splashing out and to loss of water via evaporation. (These problems led Englishman Richard Townley in 1676 to lead a pipe down through his house so he could accurately measure the rain from his own bedroom!) Therefore, in order to determine earlier climate, investigators infer the climate record from physical and biological fossil data including, among others, oxygen isotope ratios detected in ice cores, tree-ring dating, ice flow and glacier data, and archeological discoveries, and also from records intended for other purposes such as weather diaries, shipping logs, tax records, crop production and pricing records, allusions to climate in art and literature, etc.

Fig. 1a: Various temperature reconstructions for the Northern Hemisphere vs. time

Fig. 1b: Temperatures for the Southern Hemisphere vs. time

Although the MWP was a warmer period than the years preceeding, temperatures during that period were much cooler than those measured in the last several decades which have been the warmest in modern records. Also of interest, temperatures during the LIA appear to have been more regional in nature. Although the LIA years mark a modest cooling globally, Europe appears to have had a much colder climate than the rest of the world during that time. Figure 1d (Mann, 2002) reveals this regional anomoly quite well.

By studying the width of tree rings (dendrochronology) history of annual tree growth can be determined. Individual rings represent individual years while the width of each ring shows the growth rate during that year. The width of rings from trees found at higher altitudes and higher latitudes is generally a function of temperature where wide rings indicate warm years and narrow rings indicate cool years (Lamb, 1995.) Because the pattern of rings is similar to a fingerprint, dendrochronologists are able to construct a chronology by matching similar ring patterns found in living trees, construction timbers, and fossil trees. Fig. 3 shows how a fossil timber in a river bed is dated by noting matching ring patterns found in building timbers and in living trees.

Drift ice is carried from the arctic ice pack and the waters north of Iceland by ocean currents. In colder times, arctic waters carry the ice southward while in warmer times the Gulf Stream dominates the Iceland area, keeping drift ice away. Iceland and Greenland are far enough north to observe this ice but far enough south so that they are not always surrounded by drift ice. Drift ice was carefully observed by Icelanders both from shore and from ships because it threatened ships and therefore affected commerce. Drift ice can be considered a thermometer of the north Atlantic. From 1846 to present, detailed records have been kept in Iceland that show the number of months drift ice appeared along with the temperature. Bergthorsson (1969) has estimated past north Atlantic temperatures using a drift ice vs. temperature correlation derived from recorded data. For example, he observed that if ice is sighted in 20 months of one decade and 22 months of the next decade, that second decade was about 0.1oC cooler than the first. By analyzing various clues to reports of drift ice, he applied this correlation to estimate temperatures back to 1591. Using other historical references to past climate, he extended his temperature estimates back to the year 900. Fig. 5 shows the results of his research and Fig. 6 shows the variation in amount of polar ice seen from Iceland (Lamb, 1977.) Both illustrate the MWP and the LIA quite well.

Although continental glaciers have not covered North America and Europe for the last 10,000 years, mountain glaciers in Scandinavia and the Alps can be used to record the climate record. Because glaciers are massive, they respond to long-term temperature and precipitation variations on a time scale of decades and centuries. Those living near these glaciers have recorded in various ways the impact that these glaciers have had on their lives. Glaciers grow during winters by accumulating snowfall and glaciers decline during summers due to above-freezing temperatures. For a glacier to maintain its position, snowfall must equal snowmelt. Cooler summers result in less snowmelt and longer winters increase the number of days of potential snowfall. It should be noted that cooler winters may also bring drier air which could decrease snowfall, however snowmelt has been determined to be a greater factor in glacier movement than snowfall (Ladurie, 1971.) Ladurie (1971), Lamb (1995), and others have extensively documented the glacial history of Europe and North America during the LIA. Aber (2000) notes at least six phases of glacier expansion separated by milder intervals: 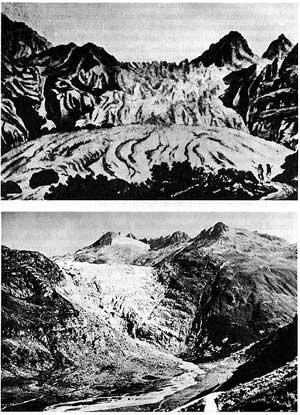 Other Sources Used to Infer the Climate Record

Lamb (1966, 1969, 1995), Ladurie (1970), Bryson (1977), and others have used anecdotal records to infer the climate record from the MWP to present. These records will be discussed in more detail later and include agricultural markers such as grain prices, wine yields and crop types, changes in fishing conditions, allusions to climate in art and literature, tax logs, church logs, and other reported history. These records are extensive during the LIA years but there are fewer clues to infer climate during the MWP. Three such clues from the Viking era are mentioned below.

Lamb (1995) describes a passage from Landnamabok, a book written in Iceland in the year 1125, that catalogs the settlement of Iceland. It was recorded that Thorkel Farserk, a cousin of Erik the Red who founded the colony, having no boat at hand, swam out across a fiord to fetch a sheep from the island of Hvalsey. The distance was over two miles. Lamb (1995) cites a medical endurance expert who established 10oC (50oF) as the coolest possible water temperature for a very strong man to survive swimming that distance. Given that the normal water temperature at present for that fiord in August is 6oF, the story suggests a much warmer climate than present. Lamb (1995) and Tkachuck (1983) both refer to old Norse burial depths being much greater in the past than today which suggests the permafrost was deeper (warmer climate) than at present. Bryson (1977) refers to ship reports that mention Blaserk and Hvitserk. These are Norwegian words meaning "black shirt" and "white shirt," respectively, that were used as a navigational reference for Greenland. Blaserk and Hvitserk referred to the same mountain but Blaserk was not mentioned after the early 1300's. Bryson (1977) concluded that during the MWP the mountain was not snow-covered so would be "darker," while during the post-MWP cooling, the mountain was "white" due to snow cover.