The 99th edition of Perspectives, Suffolk County Community College’s literary magazine featuring students’ art and written works, will be released both online and in print in June.

“Most on the magazine staff have not met in person,” English Professor, Assistant Academic Chair and faculty advisor Leanne Warshauer said. “It was a different experience having a club operate this way, but I feel we worked incredibly well together. The challenges of taking classes online during a pandemic …  this has been an incredibly dedicated group of students and I am honored to work with them,” Warshauer said.

While anyone is welcome to submit, the majority of the publication is comprised of work from Suffolk’s students.

“Some of our contributors identify as creative writers or artists, but for many, this is the first time they have shared their work with a wide audience,” Warshauer said. “Having a place for creative expression where students can share their diverse perspectives seems especially important during these times.”

A sampling of student contributors: 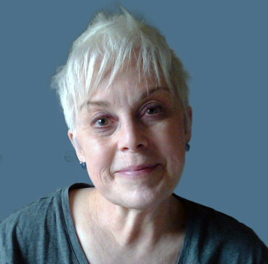 “It is an honor to be featured on the cover,” Kathy Brown said. “The piece is a symbol of someone who rose up out of a bad situation into the light.” Brown said Resurrection was created in as part of an assignment her advanced painting class and without the use of a paintbrush.

Brown first attended Suffolk part-time in 2014 and said that after she graduates in May. She wants to continue to paint. “It is one of the reasons I went back to school. I wanted to acquire some formal training because I knew I would be retiring and wanted to get back into being creative,” Brown said.

“It is hard to put your work out there to be judged,” Brown said, but then I had to remind myself of why I decided to continue my education in the first place, and that was to learn more about painting and art in general.  Ultimately, if the work I've produced pleases me, then that's all that really matters."

English major Ailie Kinnier’s first year at Suffolk County Community College was not as expected. “I was new to college and the magazine was a great outlet and way to meet people, even if it was through Zoom,” Kinnier said.

Kinnier contributed three works -- paintings and drawings -- to Perspectives and said she first discovered her love of painting in high school where she studied advanced placement studio art.

Kinnier says she’s considering minoring in art and plans to contribute again to future editions of the magazine.

“When I first enrolled at Suffolk, I told myself ‘I definitely want to join some clubs and be a part of the community’,” Kyle Bartell-Crawson, 23, said. The Creative Writing major who expects to graduate next spring took time off between high school and college to “live life and travel” and first fell in love with writing, through reading.

“I fell in love with writing styles and getting lost in a book. ‘I’m like hey I want to do that, why can’t I write a book?’” He began writing by journaling about his daily activities which he said became more creative and increasingly longer. Bartell-Crawson, has two works featured in Perspectives.

Last revised: 5/26/2021.  For comments on this webpage, contact: The Director of Communications.