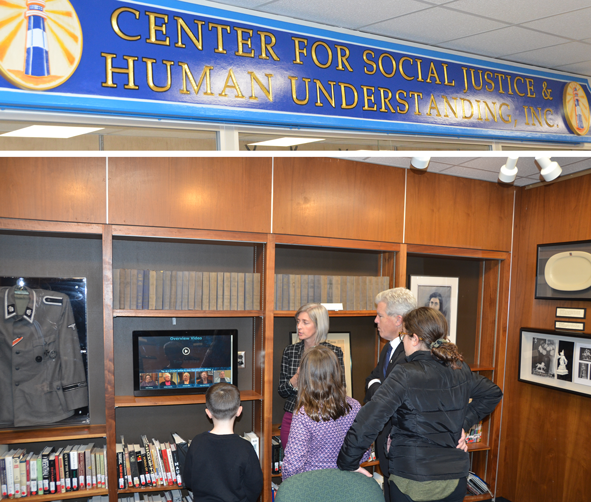 Suffolk County Executive Steve Bellone and his children visited the Suffolk Center for Social Justice and Human Understanding at Suffolk County Community College on International Holocaust Remembrance Day, January 27, the anniversary of the liberation of the Auschwitz-Birkenau concentration camp to honor the six million Jewish victims of the Holocaust and millions of other victims of Nazism.

Suffolk Center for Social Justice and Human Understanding Director Jill Santiago explained several of the center's exhibits, including video testimonials of holocaust survivors, and other artifacts.

The Center for Social Justice and Human Understanding Inc. featuring the Holocaust Collection’s mission is to educate the community about historical events, and to promote cultural understanding and respect for human dignity. The collection features rare artifacts, memoirs, documents and photographs that are interpreted and presented in permanent and traveling exhibits. The center is located in the Huntington Library on the college’s Ammerman Campus in Selden.

Last revised: 1/28/2020.  For comments on this webpage, contact: The Director of Communications.